Sage Prosthetics in the News 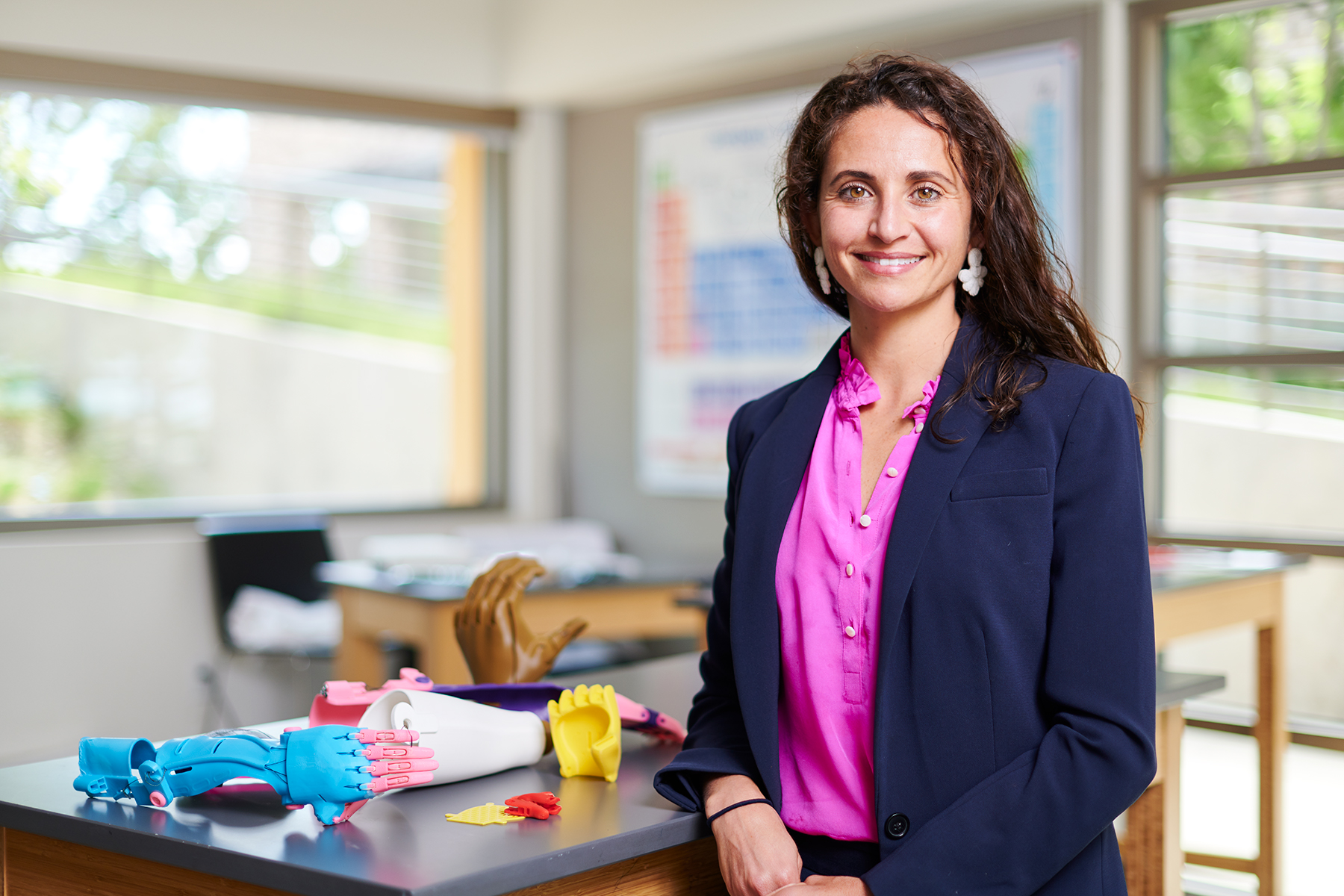 They can be pink and purple, or Superman red and blue, or have a Mickey Mouse motif. With them a kid can high five a friend, ride a bike, or play the ukulele in music class. Teacher Tanya Namad Lerch ’05 and her high school student volunteers have made prosthetic hands that do all those things using a 3D printer. They create the free, custom-designed hands primarily for children and last school year delivered nine of them.
Lerch teaches math at Sage Hill School in Orange County, Calif., where she founded and advises Sage Prosthetics. It’s a chapter of e-NABLE, a nonprofit that promotes using 3D printers and open-source designs to cheaply and easily make prosthetic hands and arms. Lerch made hands even before the Sage chapter, roughly 40 all told...

LOS ANGELES, CA – A teen is lending a helping hand by creating prosthetics for those in need.
The hand looks bionic and in many ways, it is. The bone structure is a durable, but lightweight plastic and sinews braided fishing line. The prosthetic hand was built by 17-year-old Karishma Raghuram.
The intricate design means getting the fit just right.
“We can do so many things with such little resources, and it’s amazing to see that at such a young age where we’re able to contribute in such a major way,” says Raghuram...

NEWPORT BEACH, Calif. (KABC) -- Karishma Raghuram, 17, is a senior at Sage Hill School in Newport Beach and a member of the schools' prosthetic club.
She researches, troubleshoots and builds prosthetics for people in need.
The intersection of science and technology with also community service and helping others is just what makes this project unbelievably amazing for everyone involved," Raghuram said.
Since last year, she's already made and sent out three 3-D printed prosthetic limbs to people all over the world. This year, she's building a very special pink and blue arm for a local girl... 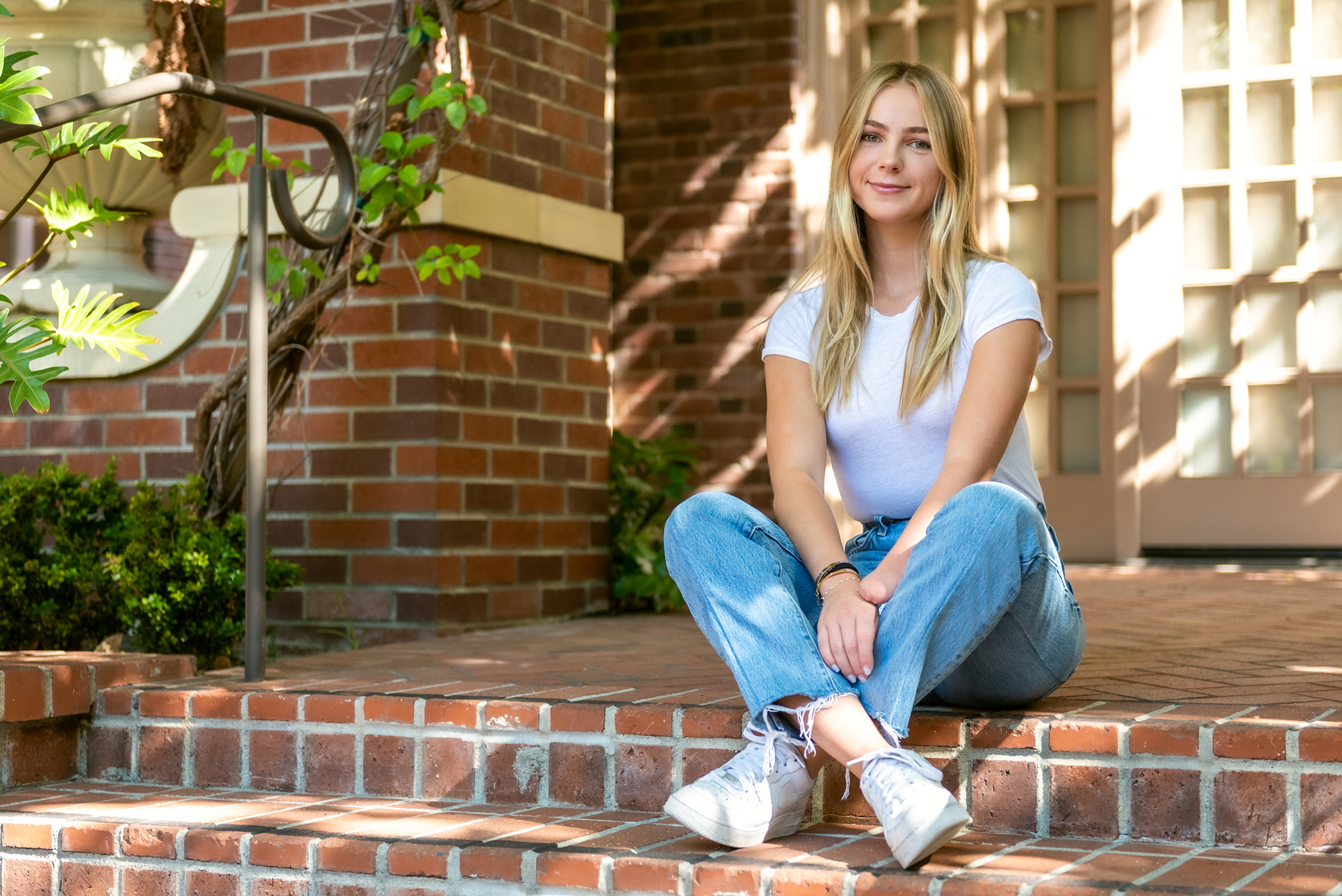 USC student Lexi Brooks knows how tough and isolating it can be to look different than everyone else at school.
As a child, she noticed the stares and heard the whispers. Some classmates even teased her — all because she was born without a left hand.
Brooks brushed it off, but she felt alone. She yearned to connect with other kids her age who understood what she was going through. So when the teenager from Newport Beach reached high school, she decided to build a supportive community where children and others like her could come together.
Her idea turned into the nonprofit High Five Project, which has hosted trips to the beach and other fun events for people with limb differences. The response from Orange County families floored her...... 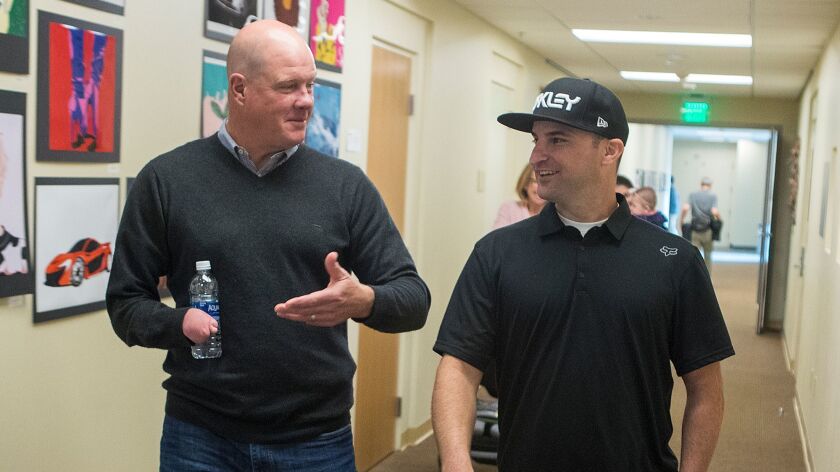 Jim Abbott, who overcame being born without a right hand to pitch 10 seasons in Major League Baseball, visited Sage Hill School in Newport Coast on Wednesday to share with students how he learned to make the most of his opportunities.
Abbott, who played for the Angels, New York Yankees, Chicago White Sox and Milwaukee Brewers between 1989 and 1999, was one of three speakers with upper limb deficiencies who told how they conquered hurdles with and without the use of prosthetics.
The other guests were Lauren Scruggs Kennedy, a former model and current fashion blogger who lost her left hand and left eye in 2011 when she walked into a spinning airplane propeller, and Stephen Ley, who was born without four fingers on his left hand and now races and builds mountain bikes for a living.
The event was held with help from Sage Prosthetics, a group of students and faculty that collaborates with Enabling the Future, a web-based international network that provides design sheets and kit materials for 3-D-printed prosthetic hands to volunteer makers and ships their completed products to places where they’re needed.
Sage Prosthetics faculty advisor Tanya Lerch said feedback received from the speakers would help shape the group’s direction and vision.
Rachel Bryant, 18, who has been involved with the group since it began in fall 2016, said it was inspiring and enlightening to hear how the guests were able to push forward despite their obstacles.
Abbott, who now works as a motivational speaker, praised the group for dedicating time to helping others. He shared how he learned to focus on the talent he was given instead of on his shortcomings.
Abbott credited his hometown of Flint, Mich., for embodying an attitude of seeking solutions and helping others.
His parents would triple-knot his shoe laces because he didn’t know how to tie them, Abbott said. But one day his second-grade teacher showed Abbott a method he had brainstormed to help him tie his shoes.
“Think about that generosity to go outside of yourself and think of somebody else,” Abbott said. “I was grateful for my hometown because of people who helped me be creative.”
Abbott said he didn’t want to be known as “the one-handed pitcher” but as a “good pitcher.”
Meeting families and their children served as “profound inspiration” for him to make the most of the opportunities in front of him, Abbott said.
“I encourage you to keep opening doors for others and yourself,” Abbott said. “Approach life with a passion, with an obligation, with an accountability to make the most with the talent you have. I encourage you to continue opening these doors and helping find solutions to make this world a better place.”...